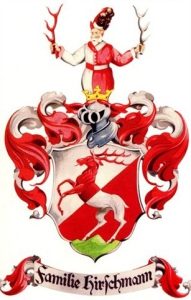 Imperial Act, Nobilitatis. For Ludwig, the Doctor of Law, and Michael, the Hirschmanns. Dated at Prag, 5 September 1606.

So have We to the aforesaid Hirschmann brothers their hereditary Wappen and Clainot, not only confirmed and ratified but also in the following manner embellished and improved, and have graciously granted and allowed them, the lawful heirs of their bodies, and such heirs’ heirs, male and female persons, to carry and use it.

Namely, a shield diagonally divided from lower left to the upper right corner into two equal parts, the lower red or ruby and the upper white or silver color; upon this, on a triple mounded green base, the middle one somewhat higher than the outer two, appears upright, ready to leap, the figure of a stag with his antlers, in the colors of the shield, counterchanged, so that the stag is white in the red, and red or ruby color in the upper, white part of the shield. On the shield a crowned, free, open noble tourney helmet, adorned on both sides with red and white mantlings, above which appears over it upright the figure of a man, without feet, with black pointed beard and hair [note that the man in the Schorndorf Wappen shown has a white beard and white hair], in a long, fitted, belted coat, with attached buttons and turn-back around the hand and neck, which coat follows the colors of the shield, but counterchanged, so that it is red or ruby on the left and white of silver color on the right side, in each hand he holds upright a stag’s antler with four points turned outward, that in the left hand being white, in the right hand red or ruby color, on his head also of the shield’s colors counterchanged a pointed hat with a tuft of black heron feathers stuck in its turned up brim.

Thus have We valued their faithful, obedient and voluntary service to the Holy empire and to our illustrious House of Austria against the common hereditary enemy of all Christendom, the Turks, and that henceforth to be rendered.