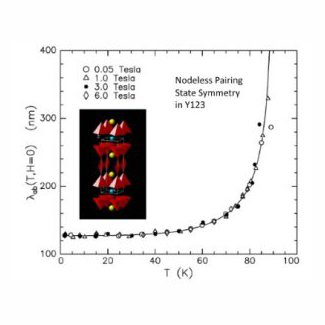 The ground-state symmetry of the high-TC dominant superconductive state is well established to be nodeless, consistent with strongly-coupled  s-wave, or extended s-wave pairing. This was first demonstrated for sintered cuprate YBa2Cu3O7−δ in 1987 [Physical Review B 36, 2386 (1987)], and later for single-crystal YBa2Cu3O7−δ [Physical Review B 39, 851 (1989)] using muon spin rotation (μ+SR). The μ+SR technique is particularly well suited for such a determination since it directly probes the bulk mixed state. Very interesting fluxon motion and pinning behaviors are also observable which, when properly understood and modeled, allows the extraction of the true temperature-dependent magnetic penetration depth, λ(T), as is illustrated in an exhaustive study of λ(T,H) in a high-quality single crystal of YBa2Cu3O7−δ [Physical Review B 69, 174505 (2004)] [post].

For most high-TC superconductors, the pairing state is irrefutably s-wave in nature.