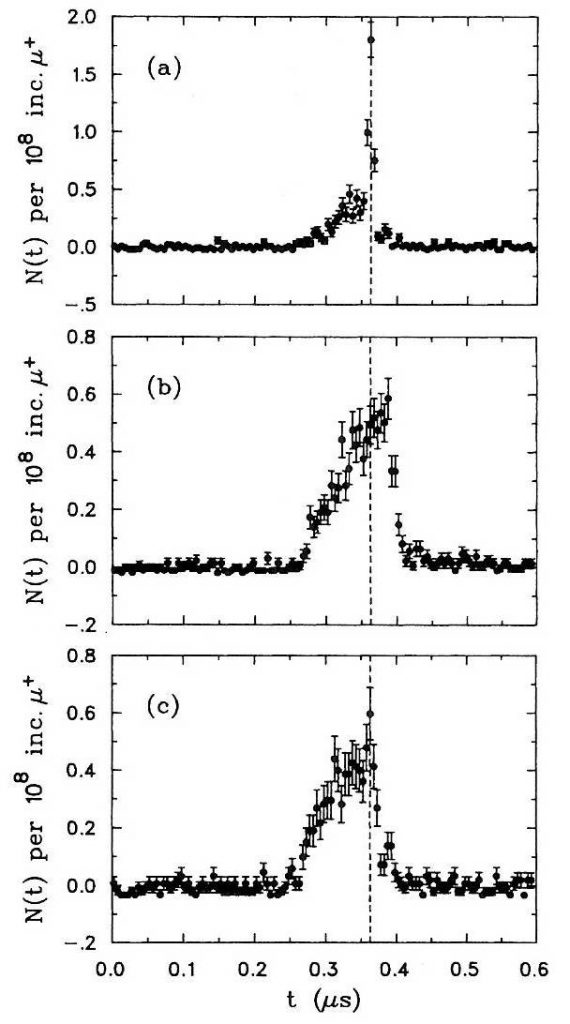 Band-gap moderated slow positive muon beams – While positive muons (μ+) typically behave as light protons, they can also act like heavy positrons (e+). Bearing this in mind, Dr. Harshman and coworkers, considering results detailing e+ moderation in large band-gap solids, proposed the possibility of similar behavior for positive muons. The mechanism relies on energy loss per unit length (dE/dx), which decreases as the stopping particle energy falls below the band-gap energy of the moderating solid, resulting in a moderated particle beam of a few eV. Since the only relevant difference between muons and electrons in this context is mass, such a mechanism was deemed applicable for producing a slow μ+ beam. Conducted at the TRIUMF facility in Vancouver, B.C., Canada, this research resulted in the discovery of the first practical technique for producing a low-energy (<10 eV) positive muon beam. It was christened with the acronym μSOL (i.e., muon separator online). The figure to the right shows the time-of-flight spectra for low-energy μ+ from the surface of (a) LiF, (b) SiO2, and (c) Cu. The data are normalized to 10 incident μ+, and the errors shown are statistical. [Physical Review Letters 56, 2850 (1986)].

The same 1986 paper reported the first observation of (<10 eV) negative muonium (i.e., Mu– or μ+e–e–) ions in vacuum. This was accomplished by again using a Cu moderator, and reversing the polarity of the spectrometer to focus and transport the Mu– ions. 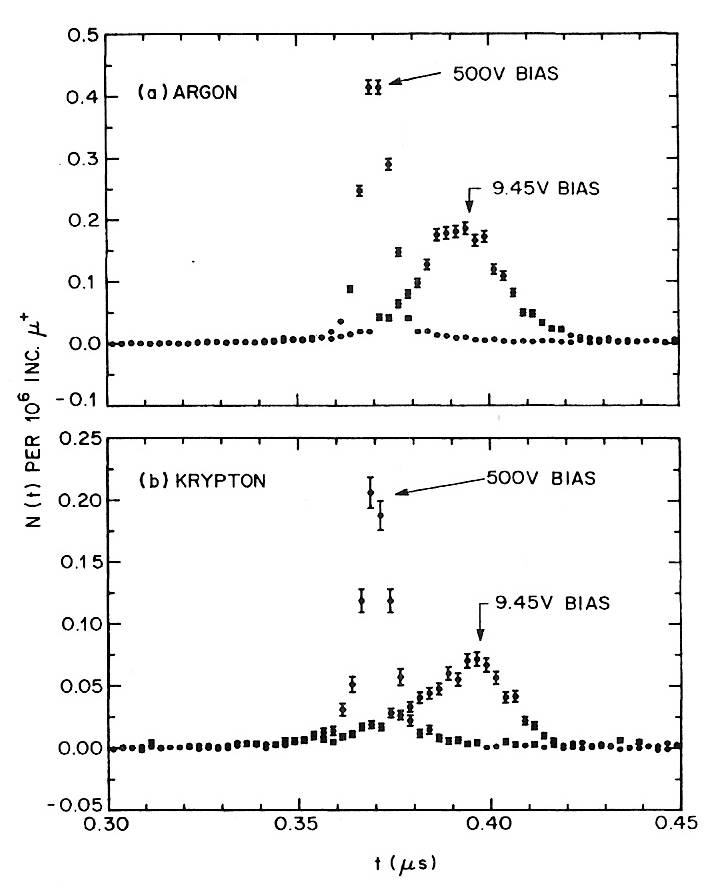 In 1987, the slow muon production rate was increased by a factor of ~100 using solid rare-gas moderators, producing a usable flux of slow positive muons. This was accomplished with the same spectrometer as employed in the 1986 paper, incorporating a specially-designed 4He cryogenic target. The figure to the left shows the slow μ+ emission from solid (a) Argon and (b) Krypton at two different acceleration grid biases [Physical Review B 36, 8850 (1987)].

The development of the band-gap moderated slow μ+ beam is documented in Discover Magazine, Wikipedia, and Everipedia.

Below is a slideshow of the slow muon spectrometer as configured in 1986 for non-cryogenic moderators, mounted on the TRIUMF M20 surface muon channel.

The slow muon production technique pioneered by Harshman and coworkers was adopted by the Paul Sherrer Institute (PSI) for their slow positive muon beam facility.